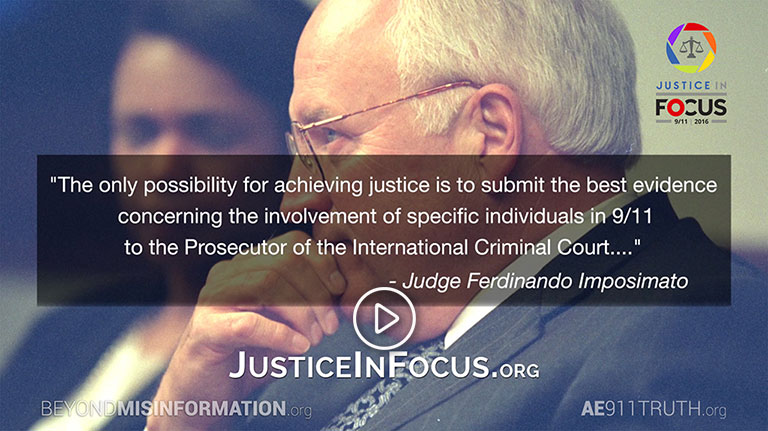 Ladies and Gentleman, before making my speech about the Strategy of Tension, that I want to dedicate to the 9/11 and world victims of terrorism, I need to thank the organizers, attorneys and experts, for putting on this important event, at the wonderful John Cooper Union University.
I apologize for my English in advance, but will do my best for all of you here and around the world.
One of the greatest ancient historians, the Greek Tucidide, once said:
"We must know our past to understand the present and be able to predict the future".
Our history, as we know it, is polluted with fabrication, silence and misinformation, starting from the true masters of the massacres and political crimes. This is because modern democracies, often masking tyrannical regimes, use the media as instruments of disinformation and distortion of people's consciences, to feed mass-fear for preemptive wars. There is no future without justice.
Speaking of the Strategy of Tension, we cannot be influenced by the trials and verdicts of guilty or not guilty, or by inert behavior of the Nations involved. There are often two truths, the historical and the judicial truth, which do not coincide with one another.
The historical truth is often only the probable truth, but we cannot build the history only on the base of scientific and mathematical evidence, that often it is impossible to get.
Before speaking about nine eleven, I would like to describe the birth of the Strategy of Tension in Italy, which dates back to 1947, the banditry of Giuliano, who supported of the separation of Sicily from Italy and Italy's annexation by the United States.
The first massacre that happened in Italy during a period stretching more than half a century was that of Portella della Ginestra on May 1st.
In April, the People's Block party won the elections in Sicily against the Christian Democratic Party or Democrazia Cristiana. This victory alarmed the landowners, the Italian politicians and the United States. In response, on May 1st, Giuliano's men fired a series of machine-gun rounds at the demonstrators, killing adults and children in the process. There were also some Italian politicians amongst the instigators of the massacre. The United States government for its part provided weapons and financial support to the authors of this attack. The American consul in Rome was accused of having provided weapons. The American Michael Stern confirmed that the U.S. had supplied Giuliano with weapons. Portella della Ginestra was always reproduced during the strategy of tension, that would involve the Mafia, politics and institutions.
The NATO bases in Italy
NATO's purpose was to defend Europe against a possible attack by the Soviet Union, but NATO also pursued other tasks interfering in many countries internal politics, using terrorist attacks and organized crime.
The neofascist terrorist Roberto Cavallaro, admitted to be a member of Gladio. He claimed that the Gladio structure was a group of army officers who used civilians, with the aim to provoke chaos and a forced reaction by the military. The Italian Premier, a NATO General and officers all met at Michele Sindona's house who was a known Mafioso and member of the P2, the Italian Masonic lodge.
The Parliamentary commission on the P2 freemasonry, chaired by Tina Anselmi, wrote in 1960: “the P2 lodge, led by Licio Gelli, conspired with criminal organizations such as the Mafia and terrorist groups, helping U.S. government interference in Italian policies. Gelli invoked "extreme measures" as the tools for "unorthodox war".
Gladio/Stay Behind

According to the Italian Parliament, Gladio was a military organization belonging to the Deep State, which interfered systematically with Italian Democracy, destroying or preventing progressive governments. The Parliamentary Commission, led by the honorable Republican Libero Gualtieri, declared that “Gladio / Stay Behind was an illegal organization operating under U.S. Government control. He added that it was led in Italy by the American intelligence services which had an agreement with the Italian Secret services for using Gladio/Stay Behind as an instrument for the strategy of tension”. Gualtieri was threatened by terrorists because of his investigation on Gladio/Stay Behind. He assessed that: All of the Gladio operations had prior approval from the US Government, which was kept informed by the U.S. Ambassador.
The secret 1967 and 1969 REPORTS on the Strategy of Tension
As an investigating Judge, I wondered: does the Deep State really exist and if so, what is its role in the strategy of tension? I did not receive an answer to my question until many years after that.
Then in 2012, I discovered three important from 1967 and 1969 regarding the Deep State, the Strategy of Tension and the Hidden War.
At the trial for the Piazza Fontana massacre carried out by terrorists, which saw Emilio Alessandrini as prosecutor, Senator and friend Judge Gerardo D'Ambrosio from Napoli, gave me a conclusive speech in 2012 with those three important documents I mentioned. These documents had been hidden in a Montebelluna bank by Giovanni Ventura who belonged to the terrorist group Ordine Nuovo and by a secret agent named Zeta who were both accused of the Piazza Fontana attack. These documents mentioned the Deep State Government and pression services like the Bilderberg Group.