Email ThisBlogThis!Share to TwitterShare to FacebookShare to Pinterest
Labels: FRENCH

Email ThisBlogThis!Share to TwitterShare to FacebookShare to Pinterest
Labels: CROATIAN

Email ThisBlogThis!Share to TwitterShare to FacebookShare to Pinterest
Labels: DUTCH 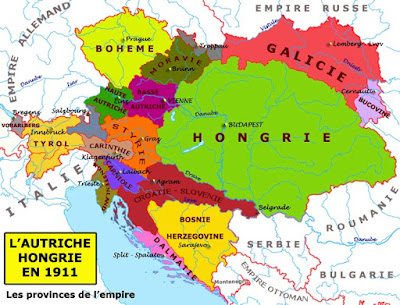 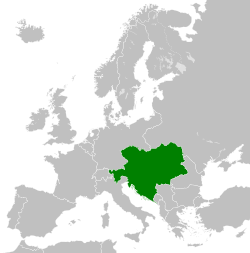 Email ThisBlogThis!Share to TwitterShare to FacebookShare to Pinterest
Labels: GERMAN

Sometimes historic changes are announced in obscure headlines such as this one: “Defense Ministers from Six Countries Focus on Cooperation in Prague.”
有些时候，历史性的转变，会通过含蓄的头版头条被宣布出来，比如这一个：“6个国家的国防部长在布拉格把精力集中的合作上。”

A more accurate headline would read “Austro-Hungarian Empire revived after 100 year hiatus.” The story says Czechia, Slovakia, Hungary, Austria, Slovenia and Croatia are going to carry out a joint exercise to protect their borders. Their joint borders are almost the same borders as those of the Austro-Hungarian Empire and within these borders civilian, police and military authorities are going to work together. Usually, a shared external border, in this case operating independently from the EU, is a definition of a country.
这个头版头条如果换成这样一句话的话，会更准确，那就是：“奥匈帝国在经历了100年的沉寂之后，再度复兴。”这个故事其实说的是，杰克、斯洛伐克、匈牙利、奥地利、斯洛文尼亚、和克罗地亚，即将举行联合军演，去保护他们的边境。它们所有的边境几乎跟奥匈帝国重合，并且在这条边境之内，民众、警察、和军方即将展开合作。通常，一条共同的外部边界，在独立于欧盟的情况下运作，那就肯定是一个国家了。

Email ThisBlogThis!Share to TwitterShare to FacebookShare to Pinterest
Labels: CHINESE

Email ThisBlogThis!Share to TwitterShare to FacebookShare to Pinterest
Labels: ITALIAN

June 26, 2017
Author: Benjamin Fulford
Sometimes historic changes are announced in obscure headlines such as this one: “Defense Ministers from Six Countries Focus on Cooperation in Prague.”

A more accurate headline would read “Austro-Hungarian Empire revived after 100 year hiatus.” The story says Czechia, Slovakia, Hungary, Austria Slovenia and Croatia are going to carry out a joint exercise to protect their borders. Their joint borders are almost the same borders as those of the Austro-Hungarian Empire and within these borders civilian, police and military authorities are going to work together. Usually, a shared external border, in this case operating independently from the EU, is a definition of a country.

It is a good guess that Karl Von Habsburg,


https://en.wikipedia.org/wiki/Karl_von_Habsburg
head of the Paneuropean Union and heir to the Habsburg throne, sees a chance to revive his ancestor’s Empire now that his Saxe-Gotha-Rothschild rivals have lost so much of their power.
Elsewhere in Europe, we are seeing a growing split between Germany and the US with people in Germany now openly talking about the EU imposing sanctions on the US in retaliation for their efforts to stop the Germans from buying more cheap Russian gas.


http://www.theaegisalliance.com/home2/theaegis/WP/2017/06/21/germany-threatens-sanction-u-s-new-sanctions-russia-imposed/
The Europeans are also pushing to create a joint army with the capability to operate overseas as yet another break with US President Donald Trump’s America.

Also, Rothschild slave President Emmanuel Macron of France has now publicly sided with Russia on Syria. This is a clear indication the opportunistic Rothschilds understand who they have to suck up to now if they want to protect their interests.

The rise of Russia’s influence, however, has led to a huge power struggle there with the Knights of Malta trying to take control, according to FSB sources there. The following Russians have been awarded the Maltese Knight’s cross:
Defense Minister Sergei Shoigu, B.A.Berezovsky, Pavel Borodin, G.E.Burbulis, Mikhail Gorbachev, Boris Yeltsin, VV . Ilyushin V.V.Kostikov, M.Yu.Lesin, S.F.Lisovsky, Yevgeny Primakov, A.V.Rutskoy, S.A.Filatov, Shaimiev, S.M.Shahry, V.B.Yumashev, and S.V.Yastrzhembsky, according to Russian FSB sources.


“Why are these people involved in an organization that has promoted the destruction of Russia (what is left of it), the collapse of industry, science and education, the extinction of the Russian people and the spiritual impoverishment of the nation?” an FSB source connected with the White Dragon Society asks. “The Masonic Order of the Knight’s Cross is awarded for the behind the scenes aiding in the destruction of Russian statehood, sovereignty and power of the State,” this source continues.

The source says the Knights of Malta are trying to control all Russian private security companies. They are doing this through an association of bodyguards in Russia led by a Mr. Fonareff who is “a small puppet to the Order of Malta.” The parent organization is the International Bodyguard and Security Services Organization.

“When you read their website just remove the “anti”…because I hear the Hospitaliers and Red Cross are involved in human trafficking and organ theft,” according to the source, who is senior in the Russian government.

The entire organization is headed by Professor George Popper, a senior Knight of Malta.

This does not mean that the majority of members of the Knights of Malta are Satanists, only certain key people around the top of the hierarchy are.

In any case, the attempt by the IBSSA to control all private security companies in Russia is typical of the fascist P2 freemason lodge who want to create an absolute, centralized world dictatorship. The Russian WSD faction is opposed to centralized monolithic control and is expected to win the power struggle there.

The power struggle elsewhere is also going against the Satanists. In the Middle East, King Salman named his son Mohammed Bin Salman as crown prince and fired his half-brother Nayef, who is well connected to the US establishment. Since the King Salman who has appeared recently in public is visibly younger than the senile Salman who took over the throne it is safe to assume he is just a body double and that the 31 year old Salman Jr. is now King of Saudi Arabia.

However, Pentagon sources say “this is just a futile attempt to delay the global currency reset.” Furthermore, “Saudi Arabia is isolated by the Russian/Iranian/Qatari cartel, and may soon be forced to sell what little oil it still has for yuan and non-dollars,” the sources say. Right now only the UAE, Bahrain, Egypt and Israel support the Saudi regime.

The Pentagon sources also say US President Donald Trump’s son in law Jared Kushner was sent on orders of the US military/intelligence establishment to Israel to meet Israeli Prime Minister Benyamin Netanyahu to demand regime change there. It is no coincidence the Iranian and Hizbollah forces, protected by a new Russian air base, have arrived at the Israeli border to give notice to the criminal Netanyahu regime that it is militarily isolated from the world. The US military is not going to fight to protect the criminal Netanyahu regime, the Pentagon sources say.

A similar move is being made in the Ukraine where President Petro Poroshenko has been summoned to Washington “to discuss regime change,” the sources say. These moves are part of a worldwide effort to end all conflicts and prepare the way for a new financial system, they say.

There is also likely to be regime change in the US, the sources continue. Here the latest developments show the entire “blame Russia” campaign by the old establishment is failing. Instead the “Cabal is on its back foot as Bernie Sanders and wife Jane are under FBI investigation for bank fraud and former attorney general Loretta Lynch is under a Department of Justice probe for obstruction of justice,” the Pentagon sources say.

Trump himself is expected to be eventually removed since the US requires real regime change while Trump merely represents the lesser evil faction of the old regime, the sources continue.

In Asia as well, there is a lot going on. Last week South Korean President Moon Jae In had a conversation with his North Korean counterpart Kim Jon Un where the agreed to unify the Korean Peninsula in the near future, according to Japanese right wing sources close to the emperor. This move, like the incipient revival of the Habsburg state, is possible now because the post 1913 Federal Reserve Board secret government is collapsing, WDS sources in Asia say.

In Japan, meanwhile there was a bizzare incident in which the USS Fitzgerald, a state of the art missile destroyer, was rammed by a Philippine registered cargo ship. Pentagon sources speculate it “may have been a false flag e-hijacking by Israel, unable to use its submarines, to frame North Korea just a few days after the 50th anniversary of the 1967 Israeli attack on the USS Liberty.”

The other possibility, the sources say, is the “the Fitz may have been immobilized by emp or electronic warfare, forcing the US military to disclose its base on mars, suppressed technology, and the secret space program (ssp) which is good for humanity.”

There has been definitely some sort of futuristic secret technology deployed in Japan in recent years. The Japanese underground military hardware stockpiles and bases in Kyushu were destroyed recently by some secret weapon. Also, the radiation around Fukushima has all vanished after a huge fleet of unknown aircraft flew over the region, according to Japanese military intelligence.

The fascist regime of Prime Minister Shinzo Abe is also under a growing siege. Newspapers here are reporting as a scandal that Abe used undue influence to help the Okayama Prefecture based Kake Gakuen educational institution open a new veterinary medicine school.

What the newspapers are not reporting is that Kake Gakuen is run by the same people who were involved in Japan’s notorious unit 731 biological and chemical warfare institute and that the “veterinary school” was just a cover for the development of bio and chemical weapons, sources close to the Emperor say. In other words, instead of mincing words about “influence peddling,” the newspapers should talk about war crimes. In any case, Abe is dying, the sources say and fundamental regime change ie the removal of the fascists, in Japan is just a matter of time.

Email ThisBlogThis!Share to TwitterShare to FacebookShare to Pinterest
Labels: ENGLISH

Email ThisBlogThis!Share to TwitterShare to FacebookShare to Pinterest
Labels: FRENCH

Email ThisBlogThis!Share to TwitterShare to FacebookShare to Pinterest
Labels: DUTCH