The U.S. administration learned an important lesson in real politics last week when it tried to get justice for murdered Jamal Khashoggi.  What became obvious is that Western power is essentially a mendacracy or liarcracy; rule by liars.  That means that if you believe the reality as described by the corporate media, you understand next to nothing.

Saudi Crown Prince Mohammed Bin Salman (MBS) deserved to be publicly blamed for the brutal murder of Washington Post columnist Khashoggi as outlined by the Office of the Director of National Intelligence report blaming MBS for the murder. https://www.dni.gov/index.php/newsroom/reports-publications/reports-publications-2021/item/2186-assessing-the-saudi-government-s-role-in-the-killing-of-jamal-khashoggi

However, when the U.S. tried to put sanctions on MBS and state its administration would only deal with King Salman, it confronted the reality that both men were long dead and their body doubles now took orders from the Zionists.

MBS tortured and murdered many of his closest relatives in order to extort money from them; that is why he was killed in 2018.  King Salman died of old age before that.  Saudi Arabia then became a full-fledged Israeli/Zionist colony.

So, in response the Mossad linked site Debka issued the following threat:

“In a final break with Washington, Riyadh [i.e. Saudi Arabia] may even go so far as to go forward and develop its own nuclear weapons program, drawing on help from Pakistan and imported Chinese ballistic missiles for their delivery…

The Biden White House’s first steps in the Middle East already signal the breakup of the pro-American axis fashioned for the region by Trump, which hinged on a set of military and diplomatic pacts binding Saudi Arabia, the UAE and Israel.” https://www.debka.com/new-biden-policies-snub-saudi-prince-uncover-israels-reputed-nuclear-program/

Then Israel used its own warplanes painted to look like American warplanes to attack Iranian positions in Syria.  Israel followed this by bombing one of its own ships and blaming this on “Iranian retaliation.” https://sputniknews.com/middleeast/202102261082201357-iranian-revenge-owner-of-uk-ship-hit-by-blast-in-gulf-of-oman-reportedly-close-to-mossad-chief/

“The U.S. Embassy in Riyadh urges all U.S. citizens to take immediate precautions and stay alert in case of additional attacks.  Actions to take if you hear a loud…”https://travel.state.gov/content/travel/en/international-travel/International-Travel-Country-Information-Pages/SaudiArabia.html#/

Then, just as this report was about to go live, Mossad sent us the following message:

“There are highly classified negotiations taking place now between…

Iran, Israel and the U.S. military for a peace agreement between the three countries.  The talks have been ongoing for a little over a week.”

If this is true then the U.S. military may finally figure out that Israel and Iran are both controlled by the Khazarian Mafia and both have been trying to start World War III between the G7 and the Shanghai Cooperation Organization.  If so, maybe these fanatics are finally waking up to the fact they WILL NEVER be allowed to start WWIII and so they are trying to surrender.

On the public fake perception front, we have a scene with a body double Biden boarding a plane. Central casting couldn’t find enough convincing-looking Secret Service agents so some with jeans and work boots had to do.  The vehicle looks like a rental that hasn’t been washed around the door handles in weeks.  Notice how the “Prez” starts running up the steps until he stumbles, forgetting China Joe can barely walk now. https://www.bitchute.com/video/iEQx0OzJW578/ 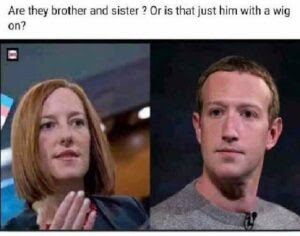 Perhaps it’s time for the Biden administration to rethink its alliance with the Rockefeller family who ordered the cancellation of the Keystone Pipeline in order to force Americans to buy oil from Zionist-controlled Saudi Arabia.  At least the Canadians don’t go around dismembering journalists.

In any case, the new surrender negotiations may be linked to a somewhat cryptic message sent to us by MI6 stating that a “DNA Illuminati,” member has been killed.  This may be a reference to Khazarian mafia Pindar or top boss Benjamin de Rothschild.  If so, anybody in his hierarchy is probably now too scared to take his place, hence the negotiations.

Another factor that could be forcing them to negotiate a surrender is the very real prospect of war crimes tribunals aimed at the perpetrators of the Covid-19 fake pandemic.

MI6 and CIA sources both told us that “Right now, a second Nuremberg tribunal that is in preparation, with a class-action lawsuit being set up under the aegis of thousands of lawyers worldwide behind the American-German lawyer Reiner Fuellmich, who is prosecuting those responsible for the Covid-19 scandal manipulated by the Davos Forum.” https://principia-scientific.com/lawyers-promise-nurember-trials-against-all-behind-covid-scam/

MI6 notes, “Our own independent counter analysis of the so-called public health emergency which brought our attention to the German lawyer who has a 100% chance of success in a Nuremberg type trial or civil Tort.”

“By authority of the apostolic and prophetic office, the Byzantine Catholic Patriarchate urgently warns against vaccination autogenocide.  the arch-heretic Bergoglio occupying the papacy notoriously promotes genocidal “vaccination for all”, saying, “It must be done!” Today, every Christian must know that Bergoglio, who worships the Pachamama demon, does not serve God but consciously opposes Him! “  http://vkpatriarhat.org/en/?p=19869

This means the fake Pope Francis who replaced the real one last year will be exposed, Pentagon sources promise.

In Canada meanwhile, an aware citizen showed how easy it is to push past the fake Covid tyranny by blowing right past “Covid-19” border controls. https://www.youtube.com/watch?v=faQBnrr_Uqo&pbjreload=101&ab_channel=THEGREATREOPENING

There has also been a leak of the original plans for the “Covid-19” move towards totalitarianism.  This leak, seen below, means the plans are no longer going to be allowed to go ahead. 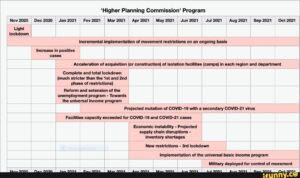 These are just a few of the signs the fake pandemic is unraveling all over the world.  What the liarcracy in charge of the West failed to realize is that no matter how long or how hard you try to avoid it, reality has a way of catching up with you.  Reality is a harsh mistress.

Pentagon sources for their part told us the following statement is true:

“Pay close attention.  You are watching a movie.  A lot of what you are seeing is completely bullshit and fake.  It’s so outrageous on purpose to get your attention at this point.  It will continue until it has accomplished that goal fully.  There is no Biden presidency.  The real Biden was executed for his crimes long ago along with Clinton.  No that woman in purple the other day wasn’t Hillary Clinton.  You are seeing actors and some have masks. 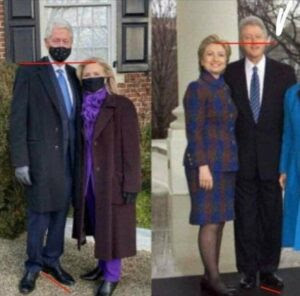 That’s why Biden keeps referring to himself as the mask president.  This means they are the good guys in this movie on the team of freedom.  This whole election was fake along with a fake inauguration.  Fake executive orders.  Fake oval office.  It’s all bullshit.  Wake up.  The military is right now controlling our country until the new elections in a couple of months.  Insurrection Act has been signed.” https://gab.com/stephenhunter9/posts/105771054961975508

However, it is uncertain if Donald Trump will be put in charge when the dust finally settles.  During the long-anticipated February 28th speech by Trump at CPAC he basically told the audience to accept the stolen election saying for the next four years the Republicans will be at the heart of the effort to oppose the Democrats.  He also promised to return to the White House precisely four years from now.  So basically he is saying, they stole the election but just wait four years.

Rest assured the U.S. will not last another four years in its current state as can be seen in this description of California:

If California continues to trail-blaze the future for the rest of the United States, that future is now clear: It is a high taxation society with a huge, impoverished, unemployed and unemployable destitute class where the middle class is annihilated, organized gangs and general chaotic street crime including muggings, rapes and murders metastasize in all major urban areas and gangs more numerous and heavily armed than the police operate openly with impunity. https://www.zerohedge.com/political/california-collapsing

The collapse of U.S. society is coinciding with an implosion in leadership throughout the West.  The situation is so dire that the following leaders have been confirmed to be fake by multiple sources: Pope Francis, UK Prime Minister Boris Johnson, Canadian Prime Minister Justin Castro, U.S. President Joe Biden, Chinese President Xi Jinping, Russian President Vladimir Putin, Japanese Emperor Naruhito and now, we have a fake Queen Elizabeth.  Basically any so-called leader telling people to accept gene-altering vaccines for a fake pandemic has been compromised and is fake.

This sounds like a hopeless situation but it is not.  That is because the people using a combination of computer graphics and surgically altered look-alikes do not control the world’s military and intelligence agencies.  They also do not control the underlying reality.  As has been widely reported, for example, so-called President Biden is not allowed inside the White House.  This is true elsewhere as well.

In Japan, for example, the Emperor is totally scared because the people in charge of the military and the intelligence agencies (including the Yakuza gangs) know that he is a fraud.  Not only that, but he is also weak and unable to protect Japan.

Japanese military intelligence has also informed us that the Bechtel Corporation has started a major construction project in Tokyo bay to install some sort of device intended to trigger a massive earthquake on or around May 11th.  Rest assured all Bechtel employees and shareholders will be hunted down and killed if they dare try such a thing.

There will also be a massive offensive to remove this fake leadership soon, sources in Western and Eastern secret societies promise.  For operational security reasons, we cannot disclose details.  However, a hint can be found in the fact that an Air Force base in Texas is getting ready to test its infrastructure against an electromagnetic pulse, or EMP, attack. https://www.nextgov.com/emerging-tech/2021/02/air-force-base-prepping-emp-vulnerability-tests/172325/

An EMP attack or similar shutdown of the internet infrastructure may be needed.  That is because the presence of so many CG leaders who can only meet “virtually” in zoom meetings etc. is a clear sign the gnostic Illuminati were right and we are dealing with a rogue artificial intelligence.