World events are quickly coming to a head, with a major move against the house of Saud and a possible coup attempt this weekend against Russian President Vladimir Putin, say Pentagon, CIA, and FSB sources.
First, the murder (or psy-ops staged murder) of Washington Post columnist Jamal Khashoggi is part of a move to remove the Zionist/Satanic house of Saud from control of Saudi Arabia and Middle Eastern oil, according to Pentagon and CIA sources.  The operation is also aimed at grabbing funds to keep the bankrupt U.S. afloat, CIA sources say.
This is how the CIA summed up the situation:
“The U.S. Treasury is holding between $3-5 TRILLION of Saudi Arabia’s petrodollars, which have been accumulating since the 70’s when this whole petrodollar sleight of hand began (around the same time that Nixon closed the gold window).  These trillions have been confiscated and will not be returned.  The same for the thousands of tons of gold stored in Credit Suisse and UBS banks in Switzerland, which was owned by Saudi Arabia (the House of Saud).  It has been confiscated as well.  It is game over financially for the Zionist Khazarian House of Saud.  This really is Game-Set-Match.”
It is also no coincidence the Khashoggi incident happened just as the head of the CIA in Turkey, “Pastor” Andrew Brunson, was released from Turkish prison.  The longer-term scenario will be for Turkey to resume control of its former holdings in Saudi Arabia and the Gulf States, while Israel becomes a Jewish autonomous zone under Turkish protection, the sources say.
As a preliminary step, “Saudi clown prince Mohammad bin Salman (MBS) may be purged, as Saudi Arabia is facing Western sanctions and boycotts in a dry run for an attack on Israel when 9/11 documents are declassified,” Pentagon sources add.

We will discuss this further below, but as this newsletter was about to be published we got urgent communications from FSB sources about an attempted coup this weekend against Russian President Vladimir Putin.  According to the sources, a big move against the autonomous Donbass region of the Ukraine by “Rothschild forces” led to a “huge dispute inside the Russian general staff with Defense Minister Sergei Shoigu …

… backing former FSB head and Secretary of the Security Council of Russia Nikolai Patrushev as the new Russian leader,” the sources say.  However, Putin was evacuated from Moscow, supported by “three patriotic generals,” and the coup was averted with the help of Russian special forces, the sources say.
This preliminary intelligence may be linked to the following report from CIA sources claiming that “various world leaders have been called to Russia for a meeting with Putin but no one came from the USA.  They were not allowed any representation whatsoever.  What is Putin planning with the rest of the world leaders?”
The reported coup attempt coincides with a sudden upsurge of fighting in the Eastern Ukraine, as reported by multiple regional news outlets.
http://tass.com/emergencies/1025467
https://www.kyivpost.com/ukraine-politics/volker-says-russia-continues-to-fuel-fighting-in-eastern-ukraine.html
The Russian sources say a landing by 5,000 troops along the border of the Eastern Ukraine and Russia was repelled.  The fighting in the Ukraine was part of an attempt to provoke a NATO attack on Russia to distract Russian attention from the coup attempt.  We have contacted White Dragon Society FSB sources for further confirmation, but none has been received as this newsletter went public.  We will provide emergency updates as required.
In any case, the Rothschilds may have tried to overthrow Putin as a result of the dire situation facing their slave colony Israel.  Here, satan-worshiping Prime Minister Benjamin Netanyahu is under attack on multiple fronts.  His wife, Sara Netanyahu, began her criminal trial on charges of fraud on Sunday.  Benyamin Netanyahu has been questioned by police twelve times related to various fraud investigations and is expected to be arrested soon, Mossad sources say.
https://www.reuters.com/article/U.S.-israel-netanyahu-wife/wife-of-israeli-prime-minister-goes-on-trial-for-fraud-idUSKCN1MH0IJ?utm_source=reddit.com
Furthermore, “U.S. Ambassador to the UN Nikki Haley resigned because of the corruption charges that she herself will be charged with for her part in Benjamin and Sara Netanyahu’s fraud cases,” CIA sources say.  “It seems that she will be charged very soon with corruption for diverting $20 million of U.S. Aid funds that were earmarked for helping the Palestinian people.  We both know that U.S. Aid is a CIA front organization,” they say.
This is how Pentagon sources summed up the situation:  “The purge begins with Israeli stooge Nikki Haley being booted off the UN, whose departure is long overdue, while her preferred replacement globalist Goldmanite Dina Powell is rejected.”
The Russian troops using electronic warfare in Syria have also shut down all Israeli Air Force activities, as reported by the Mossad-linked site Debka.
https://www.debka.com/no-israeli-air-strikes-during-past-month-iran-replenishes-destroyed-arms-stocks/
This may have something to do with the grounding of the entire U.S. fleet of F-35 fighters worldwide.
https://www.militarytimes.com/news/your-military/2018/10/11/dod-announces-global-grounding-of-all-f-35s/
This may be also why the reported coup attempt was engineered against Russia in a last-ditch effort to save the satanic government of Israel.  However, this last-gasp attempt by the Zionist/satanists to start World War 3 will not be allowed to succeed, Russian, U.S., and Chinese military sources all say.
Getting back to the Saudi situation, we know from our CIA sources that MBS was installed in power by Israeli special forces.  There is also a very strong possibility he was killed last April when gunfire was reported in his palace.  Last week, for example, Bloomberg News published what they claimed was an exclusive interview with him, but the person shown as MBS bears little resemblance to the one seen in public before April.
https://www.bloomberg.com/news/articles/2018-10-05/saudi-crown-prince-discusses-trump-aramco-arrests-transcript
We also note that the possibly murdered journalist Jamal Khashoggi was a nephew or cousin, depending on the source (maybe both, given Saudi kin relations) of arms dealer of Iran Contra fame.  Adnan Khashoggi once sent a honey trap to this writer (to give him credit, it was the most beautiful honey trap ever sent my way).  While I avoided the honey and thus the trap, she did give me a book in French from Khashoggi that claimed Jews actually originated in Egypt.  In other words, he appeared to be trying to warn me they were none other than the Set (Satan, Ba’al, Moloch)-worshiping Hyksos.  Japanese sources also informed the U.S. last week their research had shown that people calling themselves Jews were divided into Satan-worshiping and Yahweh (God)-worshiping factions.
This brings us back to last week’s report from various sources of Hillary Clinton and other members of the U.S. elite carrying out gruesome satanic sacrifices and rituals.  Please recall that the Arch of Ba’al was on display in Washington, DC as the fight to install Supreme Court Judge Brett Kavanaugh was reaching its climax.
http://digitalarchaeology.org.uk/events/2018/9/26/the-triumphal-arch-of-palmyra-in-washington-dc
“Jonathan Cahn, author of the book The Paradigm, has pointed out that Baal was a god of power, fertility, and child sacrifice,” according to this website and many other sources.
https://www1.cbn.com/cbnnews/2018/october/arch-of-palmyra-in-dc-coincidence-or-pagan-invitation-nbsp
This same Arch of Ba’al has been on display in front of various gatherings of “globalists,” including a “World Government Summit” in the UAE in 2017.
https://www.thenewamerican.com/world-news/asia/item/25404-at-world-government-summit-top-globalists-drop-the-mask
It may be just a coincidence, but last week as the globalist World Bank and IMF held their annual summit meeting in Bali, Indonesia, the island was struck with an earthquake.
https://www.bloomberg.com/news/articles/2018-10-10/the-latest-earthquake-strikes-off-bali-indonesia
As a CIA source commented, “There are no coincidences in my world.”
Even if the earthquake was just a coincidence, like the lightning that struck the Vatican as Pope Francis was being selected, there can be no doubt that the good guys are winning.
On this front, our Pentagon sources wish to share the following two pictures of Melania Trump with our readers with the following explanation:  “It may be Red October, but Melania wears white hats in Kenya and Egypt.  She wears a white pith helmet in Kenya to warn China about its colonial ambitions for Africa, and a white fedora in front of a pyramid to declare war on the cabal.” 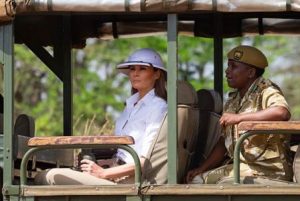 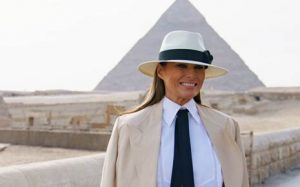 As usual, there is a lot we cannot report yet in order to protect our operations, but rest assured that evil is being systematically removed from this planet.